Although various parts of the world disagree on what temperature beer should be served, it is universally agreed that it is at its best when served cool. North American beers - craft or mass-produced are mostly served chilled, so it makes sense to have a cooler for your commercial establishment if you are going to be serving the malt and hop-laden alcoholic beverage. Also known as kegerators, keg refrigerators and coolers are usually manufactured to fit one or more half-kegs of beer at a time. Wine kegs can also be accommodated in these appliances and used to pour delicious, cool beverages for your customer.

Commercial keg coolers are capable of accommodating between one and five kegs of beer, keeping them at an optimal temperature for fresh-tasting, smooth beer that is poured straight from the keg tap. Portable keg coolers come with couplers that infuse the beer with a gas - usually nitrogen, carbon dioxide, or just regular air to give it a bubbly consistency that helps form the head when poured into a glass. Manufacturers like True Manufacturing are specialists in producing kegerators that are high-quality and able to withstand the rigors of daily use with minimal maintenance.

Portable beer coolers are meant to house at least one keg of beer at a time, so it is important to know that you will need enough room to accommodate one or more kegs at a time, depending on the holding capacity of the kegerator. There is also the draft tower on top, which means that undercounter storage for these appliances can be a little difficult. These often come with casters to make portability easier.

Countertop keg coolers are meant to sit on a shelf and can be more convenient for usage if you have limited space. They can be connected to pressurized or non-pressurized beer kegs and run beer through their cooling system. The result is a cold, frothy beer every time you pour a glass.

Outdoor keg coolers are made specifically for enjoying a tall cold glass of beer outside your house or establishment and are designed to withstand the rigors of hot and unpredictable weather, along with conditions like rain, sleet, and snow. These have a stainless-steel construction that is easy to clean and temperature controls to keep the beer at its optimal serving temperature, regardless of the weather outside. These kegerators are a perfect option for serving fresh beer at outdoor events, barbecues, and parties. Beer kegs are available in both full and half sizes, so it’s a good idea to make sure that your new purchase will offer ample space for you to fit kegs of your favorite beverage inside. When colloquially talking about beer kegs, it is usually assumed that the keg being referred to is a half-keg, although different sizes of beer kegs are available on the market, such as European Kegs, ¼ barrel kegs, ⅙ barrel kegs, 5-gallon kegs, and mini kegs.

Beer kegs usually contain two sections - one for holding the beer, while the other contains gas, which facilitates tapping. Prices for kegs depend on various factors, such as the size and volume of the keg, taxes on the beverage, whether the beer is domestic or imported and the brand and deposit for the keg (which is usually refundable). Import and craft beers tend to be more expensive than domestic beers, with prices reaching around $200 for a half-barrel, $125 for a quarter barrel, and about $100 for a sixth of a barrel. Seasonal beers can be even more expensive, with prices reaching in excess of $400 for a half-barrel. This entails that you will save a lot more if you rent a domestic beer on sale.

Renting a keg is the most common way that large volumes of beer are purchased, but this involves additional costs, such as keg deposits, which vary from $20-$50, depending on the keg size, its brand, and the return date. Taps can be rented for anywhere between $15-$30. Once the beer has been consumed, the empty keg and taps can be returned to receive your deposit back. Before you decide to rent a beer keg, it is a good idea to compare prices, as the same keg can vary in prices as much as $20 between different retailers. 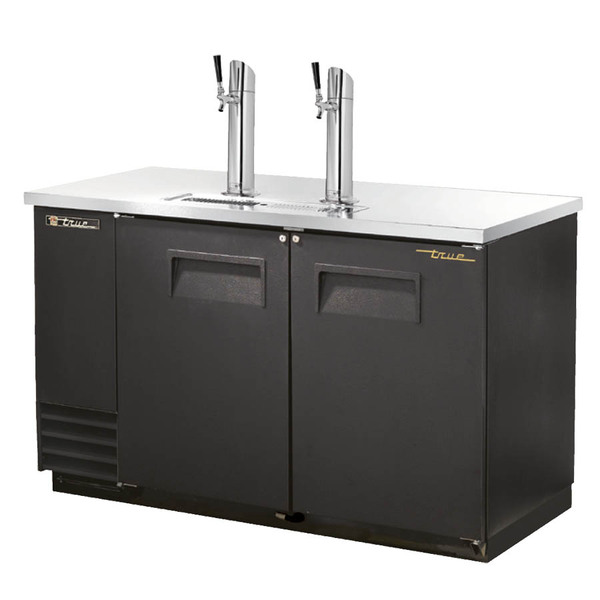 Beer keg coolers are manufactured by a multitude of specialist brands like Beverage Air, Glastender, Norlake, Eagle, Master-Bilt, and True Manufacturing. It is best to look for a model that will suit your needs best - whether you need the cooler to serve beer in outdoor venues, the storage capacity of the kegerator, how many kegs it can hold at once, and if you will need to store the beverage fridge under the counter. Most commercial manufacturers offer beer coolers in different configurations like portable kegerators, outdoor kitchen kegerators, undercounter beverage fridges, and mini kegerators, so it’s important to know your usage scenario before making an investment.

Beer refrigeration systems also require regular upkeep to make sure that the beer coming out of the taps does not taste stale. It is recommended that you clean out the kegerator pipes after every keg with a caustic agent to prevent “beer stone” buildup. These are the remnants of beer and foam that remain inside the pipes which give beer an uncharacteristic “skunk” flavor if they are not flushed out properly.

Keg coolers help facilitate temperature regulation of your stored beer. When the weather is warm  outside, it is important to remember that kegs need to be maintained at a cool temperature to ensure that the beer comes out cool and fresh. Thermoregulation of beer also helps in preserving an optimal amount of foam that comes out alongside the beer when you pour a glass. This helps in making a perfect pour that has an inviting head at the top. Beer that is kept too warm may have excess head when a new keg is tapped into and little or no foam when the bottom of the barrel is reached. Keg coolers help prevent these situations and present you with a perfectly balanced pint every time. Portable kegerators also provide you with the opportunity to serve guests at outdoor venues where serving beer would otherwise be unwieldy. Also, since the beer poured into a glass from a keg comes out fresh, crisp and aromatic, it is much more favorable to beer cans and bottles. 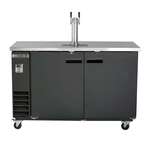