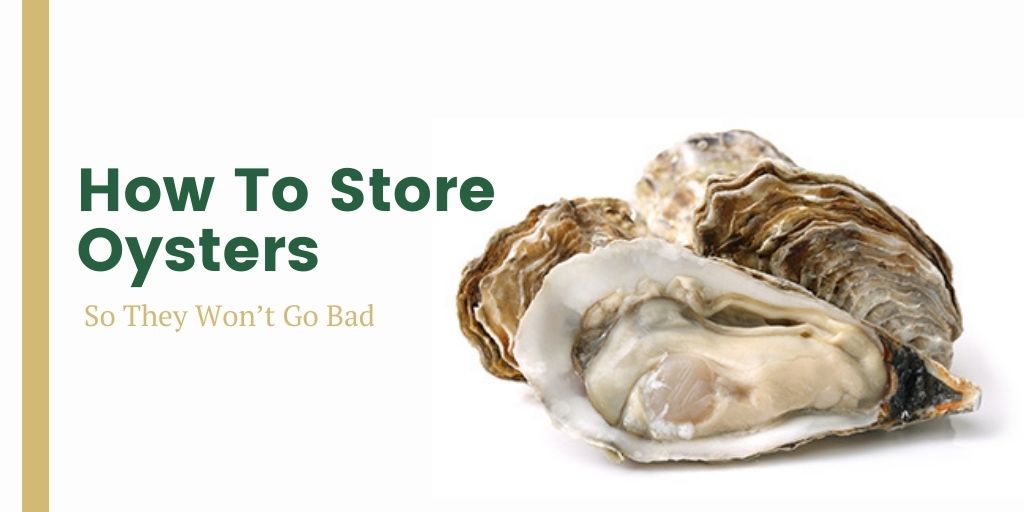 Two Ways of Storing Oysters to Keep Them Fresh

There are two methods to store oysters, refrigerating and freezing. Choosing between these two will depend on the state of the oysters:

These methods can be tedious at first, but you will discover how straightforward they are once you do them.

If you’re wondering, "How long do oysters last?" the answer will depend on your storage method. However, you'll enjoy their flavors better if eaten within the next 48 hours.

Here are the steps to store oysters that will keep them alive for a week:

Step 1: Prepping Up the Mollusks

The first step is to refrain from washing the mollusks. Contrary to common belief, you should not wash the oysters even if their shells are dirty. The dirt and grit on the oysters will keep them moist and act as insulation for the meat. Leave the washing for later before you shuck them.

For the next step, get a bowl or any container with no lid. Even a portable cooler will do as long as it can fit inside your fridge. You won't be needing the lid cover because sealing the container will suffocate the oysters. Remember, the mollusks need oxygen to keep them alive.

Then, pour a layer of ice to cover the bottom of the container. You also need to make sure that your fridge has a temperature setting between 35 to 40 degrees Fahrenheit. Keeping the coldness at below 40 prevents bacterial growth, but if you go below 35 degrees, it'll kill the oysters.

Now it's time to get your oysters comfy on the ice bed. Place them on top of the ice with the deep side down. If you notice, this is similar to what seafood merchants do at the market.

You can still put them in any position you want without impacting their freshness. However, if you turn each oyster with the deeper side facing the ice bed, you can retain most of the juices.

Step 4: Cover the Oysters with a Towel

Since sealing the container will deprive the oysters of oxygen, you need to use a towel instead. Use cold water to dampen a towel, then place it on top of the oysters to cover them. You can also use kitchen paper towels instead so you can dispose of them later.

Using a damp towel will have the following effects on your oysters:

If you don't have any kitchen towel available, pages of a newspaper can be a great alternative.

Step 5: Place the Container in the Fridge

Place the container in the fridge. If you have a reach-in refrigerator, it's best to store the oysters there. This type of refrigeration has ample storage space to preserve food.

Set the temperature between 35 and 40 degrees Fahrenheit (2 to 4 degrees Celsius).

Check your oysters at least once a day and perform these steps, as needed:

These additional steps may seem time-consuming, but the fresh oysters you get later will make it worth your while.

Step 6: Store for No More Than Two Days

While oysters can be kept alive in the refrigerator for up to seven days, it's best to consume them within two days. When you eat them after the first 48 hours, they will not be as flavorful. Plus, you'll be putting everyone who eats them at risk of stomach problems or even food poisoning.

When it's time to serve and eat them, take the container out from the fridge, remove the towel and clean the oysters. Wash with cool running water and brush the dirt from the shells.

Before serving them, inspect the oyster shells and toss out those with cracks or breaks. Also, throw away oysters that smell foul or have some mucky discolorations.

Can you freeze oysters instead? Yes, you can choose to do so.

If you decide to go this route, you should shuck them first. Never freeze an oyster in its shell unless you're planning to cook it later.

Here are the steps to store the oysters after shucking them:

Rinse the shells with cold running water and brush the grit away. You need to remove any bacteria on the exterior before opening it to prevent germs from transferring to the oysters.

Shuck and place them on a temporary bowl together with their internal juices. Once done, transfer the oysters to a freezer-safe container. Don't forget to include the flavorful juices.

Place the lid and make sure that it is completely sealed and airtight. If you're using a resealable bag instead, press the air out before sealing it shut. Since you no longer need to keep the oysters alive, airtight storage will preserve the oyster meat longer.

Step 3: Store for up to Three Months

Freezing your shucked oysters can keep them fresh longer than the refrigeration process. If you're using a reach-in freezer, they can be frozen quickly and can stay fresh for up to three months.

However, keep in mind that oysters tend to lose their flavorful taste the longer they stay in the freezer. If you've stored enough of its liquor with it, they can help to preserve some of the flavors when you cook them.

When the time comes for you to cook the oysters, you should thaw them first. There are two ways to do it:

If you decide to use cold water, you need to cook the oysters immediately after thawing, or they'll go bad.

Store Your Oysters Properly and Retain their Flavor

Choose from these two methods depending on how you plan to eat the oysters later. Knowing the proper way of storing them can make a huge difference in the quality of their taste.